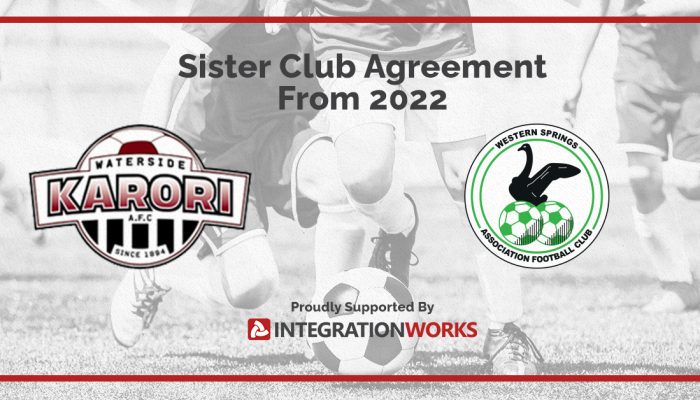 We already have a strong relationship with Waterside Karori AFC at player and management level. We now also have a common anchor sponsor in Integration Works.This has led to a non-binding relationship to share and promote each other’s offerings to their members. We have a number of common practices which make this relationship aligned;

The relationship will open up further opportunities around the following:

Our Holiday Programmes, Karori Kicks Programme, Football Fives 5-a-side and Football in Schools provide players more opportunities to have fun playing football and to remain involved in football throughout the year.

Our Men's first team plays in the Central League, and our Women's in the W-League.

Karori Swifts
The Wellington Swifts were formed in 1894. They played in a maroon shirt and dark shorts. The Swifts football club were a nomadic bunch with no roots to any one district, wandering all over Wellington before moving to Karori in the 1950's.

Waterside
Waterside were formed in 1921, and played in black and white stripes. They were one of the most famous football clubs in New Zealand during the late thirties and early forties, due to the success the club had in winning the Chatham Cup four times (1938, 1939, 1940 and 1947). Watersides' early success was mainly due to the Port of Wellington employing many British workers, who were crazy about football.

The Merger
By the mid 1980's, Waterside was a wealthy club and was experiencing success in the top men’s leagues. Karori Swifts strength was in its size. Karori had 10 men’s teams, 2 women’s teams and 40 junior teams, but it lacked success at the higher levels. A merger of the two clubs was seen to benefit Swifts by way of status and sponsorship money, whilst Waterside would benefit from expanding its small player base.

The merger took place in 1987, forming Waterside Karori AFC. The question of strip was easily decided. Waterside played in black and white, as did most other sports codes in Karori, so those colours became the club’s new strip.

Waterside Karori AFC today
The club currently has 14 men's teams, 1 women's team, an U-17 youth team, and over 700 junior members.